“We are living in a PARADISE that gifted to us by our ancestors and by the great souls like M.K GANDHI,PATEL,NETAJI,AMBEDKAR etc., by their utmost effort and struggle and that legacy should remain intact till the very last end of my life” —- said a 21 year old protestor(Fatima) in Saheen Bag,New Delhi. The protest started with a snail’s pace with just a few number of women raising their voices against the CAA act on 15 th December,2019. But with time being, it gained its momentum as it assimilated various sensitive issues like Barbaric act of police in Jamiya and AMU, and violence of unidentified goons in JNU.

It is a protest that did not get any media mileage and even it did not have any political leader to lead. It was the WOMEN,I repeat, yes WOMEN who showed their solidarity,firmwill and patience and by the grace of God, after 16 days elaption, from 31 st December onwards it started getting it’s coverage in some unbiased media. 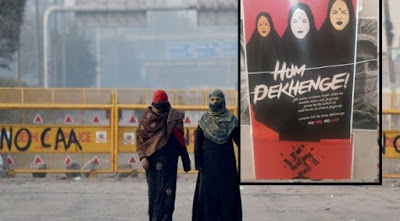 In the midst of 31st December’s CHILLY night(Temperature 4°c), when most indian women were enjoying their night by going to the PUBs or BARs to welcome the new year or wrapping herself in blanket by watching NETFLIX serieses , on the same night, these were the women who were registering their protest , standing in the chilly cold at that place and welcoming the new year by singing our NATIONAL ANTHEM,uplifting TIRANGA(tricolor) in one hand and upholding PREAMBLE of our CONSTITUTION(that reads WE,THE PEOPLE OF INDIA, having solemnly resolved to constitute India into a SOVEREIGN, SOCIALIST,SECULAR, DEMOCRATIC,REPUBLIC…..)in other hand and fighting for “the whole India’s inclusive right”. That true spirit of NON-VIOLENCE spread across the country in such an extent that after 30 days of that protest, many women of various part of the country(Bihar,Mumbai,Prayagraj,Park-Circus and lately in Jharkhand) started to come out of their shells and raising their voices by saying “if they can do this in that acute cold then why can’t we?”

After some days , three petitions had been filed in Delhi High Court against the protest as it has blocked a major road on that area and The high court ruled that “It’s  police matter and the police should act on the behest of public” . The government is feeling so threatened that Lt General of Delhi has issued an order and passed “National Security Act” (a victorian era Preventive Detention act) in the heart of the capital on 17th January.

Much effort and various processes were applied by the government to malign and suppress this protest like spreading fake videos in internet, propagating fake news about the protestors but this Pity things did not dampen the spirit of those women as they truly belief in the idea of “INCLUSIVE INDIA” and they have the firm belief in Gandhi’s ideology of TRUTH and NON-VIOLANCE . After passing 38 days long protest ,they are started to become the stellar of Anti CAA/NRC/NPR mass-movement . Indeed, these women deserve much respect and adoration for their patience,perseverance and showing true spirit of the DEMOCRATIC value. Now it poses a threat to the Government and offers and opportunity to us for uplifting our support for the INCLUSIVE INDIA that is started to decay in modern time with the unflattered attack on the minorities. Otherwise,our future generations might not forgive us if we don’t work upto the task.

(the opinion is personal and everyone has the full right to either consent or dissent to my view… Ranan Ghosh)
Tags: @

THE ROLE OF TRIBALISM AND NEPOTISM IN UNIONISM